At our company, everyone gets an opportunity to dream big and thrive at work and home. With career growth supported through learning and development resources, we pave the way so that our people can boldly go.

Rob Seamann went straight into the U.S. Army after graduating from high school. After serving - and with a wife and two kids in tow - he had a goal to establish a steady career. At the time, his mother was working for Thermo King, a Trane Technologies business, which had a strong reputation in his community. She spoke highly about the company, and her passion sparked his interest. There was a job opening in manufacturing, a field that Rob believed offered stability, solid pay, and good benefits to help support a family. He applied and was hired as a crater, an assembly team member who puts finished products into wooden crates to be shipped to a customer. It was his entry into a long career in manufacturing.

Working his way to the top

After working as a crater, Rob joined the production line as an assembler, then moved to the Powder Coating department. It was here that he developed an interest in advancing his career in manufacturing. Using veteran benefits offered through the GI Bill for training in heating and air conditioning, Rob earned his associate degree, leading to new opportunities in the painting and testing departments.

Another door opened when he accepted a position as a team leader, prompting him to enroll in the company’s Team Leader Development Program to grow his leadership skills.

Rob took advantage of the company’s Tuition Reimbursement Program to go back to school and get the skills and qualifications needed to become a supervisor. Trane Technologies partnered with a local university, which allowed him to transfer credits from his associate degree and complete an 18-month accelerated program to earn a bachelor’s degree in business administration.

“It can seem scary going from an hourly role to a salaried role. What pushed me over the fence was when the company developed a supervisor and development role. It was a great opportunity to help me slowly work my way into a salaried supervisor role until I was comfortable.”

After working in manufacturing for 25 years now, he has no plans to retire just yet. Rob loves what he does.

“The biggest seller for me is the people. I care about people. In my role as supervisor, I help others grow. I get to learn what their dreams are and help them develop and get to where they want to be,” said Rob. “If I could offer advice to anyone interested in manufacturing, it’s that this is an industry that offers many opportunities for you to develop and grow into your own niche. We work for a great company that offers resources and support to help you grow your career too, so take advantage of these programs, set goals, and don’t stop until you reach them.”

You could say that Rob was always seeking opportunities to progress. And it was his drive to progress that pushed him to grow his manufacturing career, working his way from being a dreamer - to dreams coming true. 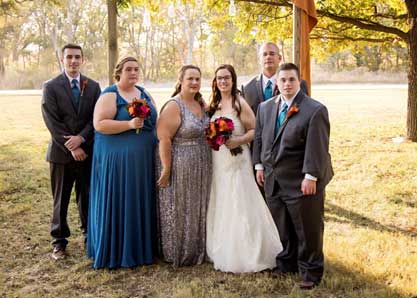 Rob Seamann and his family

Ready to dream big and boldly go? Explore our opportunities and open jobs.

Investing in the success of people includes building communities of belonging, advocacy and allyship. For our Black Employee Network, we're recognizing 10 years of progress and the need to continue.

Inspiring the Next Generation of Sustainability Leaders through STEM Education

To Close the Talent Gap in Manufacturing, Employers Need to Prove to Employees How Valued They Are

A spotlight on the shifting needs of the manufacturing workforce and the importance of investing in opportunities that match the demands of today.

Why We Boldly Go: Embracing Cultural Heritage to Live Authentically

Ana Llanos is empowered to bring her whole self to work, sharing her heritage with her team and advocating for diversity and inclusion—she also uplifts her community through STEM education.