We’re helping solve our customers’ big challenges by innovating and delivering solutions that are better for their business - and for the environment.

The opportunity: to advance the City of Aalsmeer’s goal of fossil-free electricity use by 2040 with a novel approach to capture and recycle heat generated by NorthC Datacenters as a source of heat for surrounding facilities.

Often referred to as the flower capital of the world, the City of Aalsmeer, located 30 minutes southwest of Amsterdam, draws thousands of visitors each year – many touring the renowned Royal FloraHolland auction and its 30,000 flower and plant species.

While the colorful accolade is certainly notable, Aalsmeer touts an even more impressive distinction: the goal of fossil-free electricity use by 2040, paralleling other significant climate goals across the Netherlands.

The commitment is no small undertaking, but a unique group of local entities – with different, yet shared interests – is already paving the way for progress. Brought together by their common sustainability goals and motivation to reduce community-wide carbon emissions, the municipality – along with NorthC Datacenters, a local sports complex, a childcare center and a nearby plant nursery – joined forces to create the Aalsmeer Energy Hub.

Waste or recycle – an easy choice

Data centers require significant cooling to run at optimum performance levels since their servers produce abundant heat, which is often collected by an HVAC system and expelled into the external environment – as was the case with NorthC Datacenters.

Any heat released into the environment can be considered wasted – and since it takes energy to produce heat, wasted heat is wasted energy. A better, more environmentally friendly route can be taken: capture and recycle it as a heat source for other functions. This can be done inside the same building, or for other locations in the community.

The choice was an easy one for Aalsmeer Energy Hub’s partners. Recognizing an opportunity to utilize wasted heat as a mechanism for reducing community electricity consumption and carbon emissions, while helping the sports complex, childcare facility and plant nursery shift away from using gas fired boilers, the groundbreaking project was officially launched in 2019. 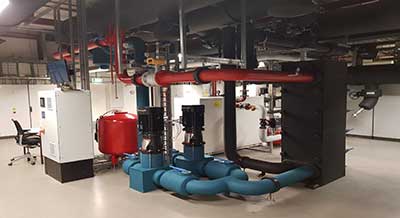 Aalsmeer Energy Hub collaborated with Trane Technologies’ local team on developing a custom electric heat recovery system, leveraging Trane® CITY RTSF screw compressor heat pumps to capture excess heat from NorthC Datacenters and transfer it via heated water to the other three locations. Conversely, chilled water from those facilities returned to the datacenter – providing its necessary cooling requirements. This energy transfer delivered a lower base temperature at NorthC Datacenters, significantly reducing the electricity needed to create an optimal temperature within the facility.

“It starts with knowledge about the possibilities,” says Jeroen Roos, partner for Infinitus Energy Solutions Group, which helped consult on the project. “I think a lot of people don’t know it is rather easy to heat and cool your building with heat pumps, so it starts with educating people on their economic, and other, advantages. In the future, this municipality will have the right to eliminate natural gas from certain areas, and I think more and more people are starting to prepare for that situation. The impossibility of using natural gas in the future is very important.”

“I think a lot of people don’t know it is rather easy to heat and cool your building with heat pumps, so it starts with educating people on their economic, and other, advantages.”

By embracing bold innovation and advanced technologies, the Aalsmeer Energy Hub project is a quintessential case study for accelerated decarbonization.

Previously wasted heat from NorthC Datacenters is now captured and dispersed to the childcare center, plant nursery and sports complex – all of which are achieving cost reductions and natural gas use. The closed loop system has decreased natural gas use, enabled a transition to low-GWP refrigerant and improved the overall energy efficiency of all facilities, avoiding nearly 400 metric tons of CO2 emissions annually – equivalent to the energy used by 48 homes each year. Additionally, all Aalsmeer Energy Hub partners are saving a cumulative ~210MWh in electricity annually.

Aalsmeer Energy Hub’s dedicated commitments, innovative strategy and symbiotic relationship is enabling a greener, more sustainable future – one that is free from fossil fuel use, with significant emissions reductions.

Discover how Trane Technologies is leading the way in reducing GHG emissions.

Installation of new electrified Thermal Management System provides all-electric heating to the facility and is expected to reduce 1,800 metric tons of carbon emissions.

We believe innovation for everyone, by everyone, can turn ideas into a chance at a better future. Here’s how we’re doing it.

Indoor Air Pollution: How Lessons from the Past Can Help Us Today

A look back on IAQ strategies and how innovative new technologies—plus an integrated, data-driven approach—can help us tackle IAQ issues in the most energy-efficient way.

Sustainability in Action: Leveraging Energy from the Sun to Reduce Carbon Emissions for ECS